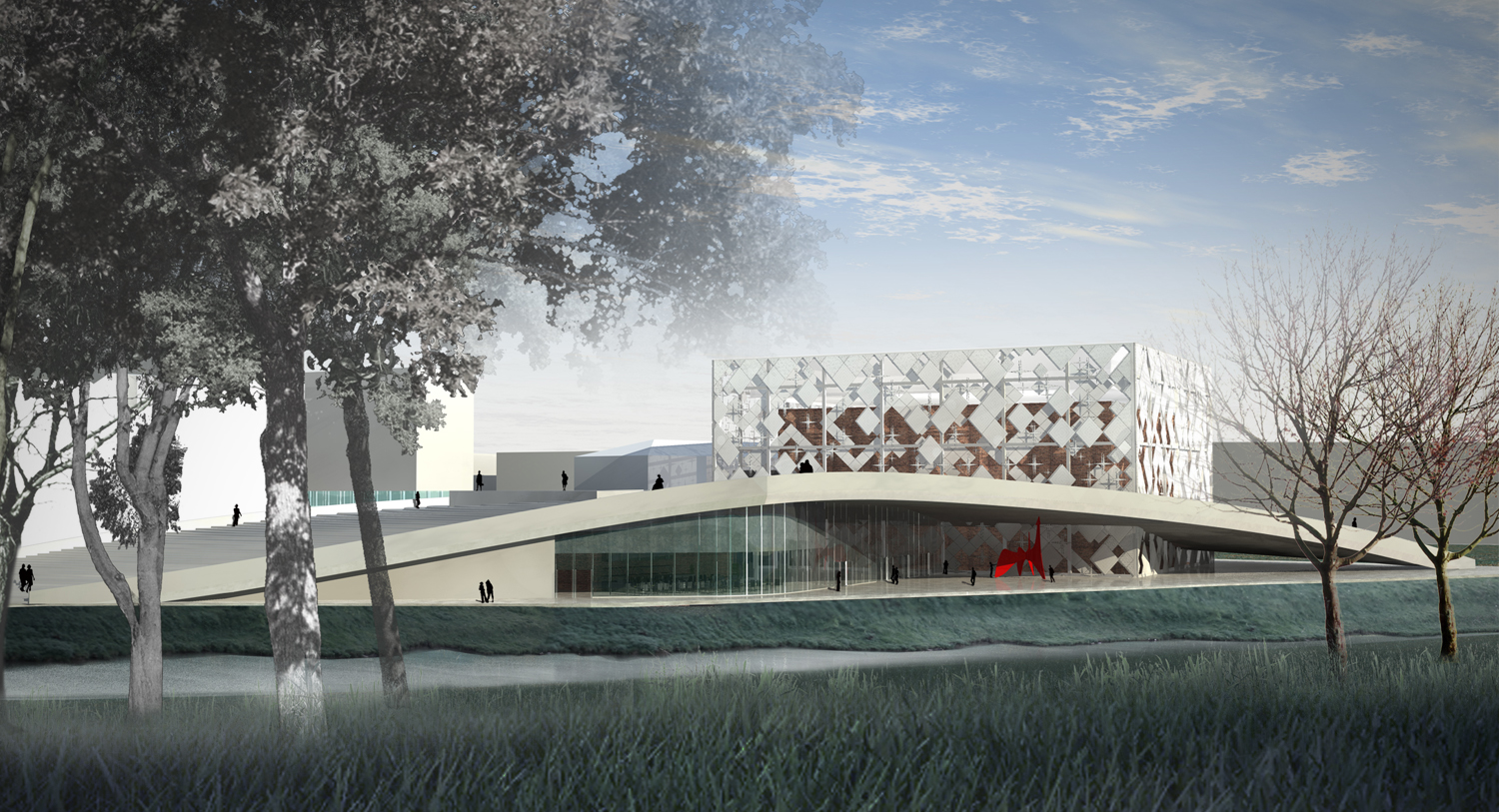 The site is located near Padua’s old city center on the northern shore of the Piovego canal, facing the Arena Gardens and the family Scrovegni’s Chapel painted by Giotto.

The project creates a strong reference point for the surroundings requalifying the whole area.

+ Two brick volumes: the bigger one is intersected by a curved roof while the smaller one is covered by it. The upper part of the big volume is covered by a technological facade which allows an accurate temperature control of the whole complex.

+ A bent roof emphasizes the view over the park both for visitors entering the main street, opening up a perspective from the foyer, and for people walking over it creating an open-air piazza and meeting point.

The building’s main heating source is the sunlight, the central volume’s facade is conceived to capture as much sunlight as possible in wintertime and give shade in summertime. This way, passive bioclimatic control of the interiors reduces significantly energy-use and harmful emissions. Areas which need specific temperature control, as the theatre and the concert hall, are isolated in specific brick cubes to avoid thermal bridges and heat loss.

The main volume in brick is covered by an origami-skin, which creates a comfortable diffused-light effect and casting shadows. This way the functional paths, often less considered than other main areas, gain great aesthetical value passing between the two systems and becoming an excellent viewpoint to admire the architecture and the effects created by the facade.

The origami squares are made of PTFE-fabric combined with a shape-memory film. The highly hydrophobic proprieties of the PTFE-fabric reduces friction, wear and makes the orikoji waterproof and self-cleaning. A shape memory film is a polymer, capable of “remembering” its original cold-forged shape, such as plane configuration and dead folds, returning the pre-deformed shape by heating. The orikoji squares fold mechanically so the sunlight can heat the interiors, then unfold providing shade as the temperature reaches 22°C.

+ winter situation: folded orikoji let the sunbeams heat the brickwall and create a greenhouse effect. The air cavity between the volumes reduces thermal bridges and allows heat to be uniformly diffused.

+ summer situation: unfolded orikoji shades the thermal mass from the sun avoiding the greenhouse effect. Heat in excess is expelled by ventilating the buffer space. 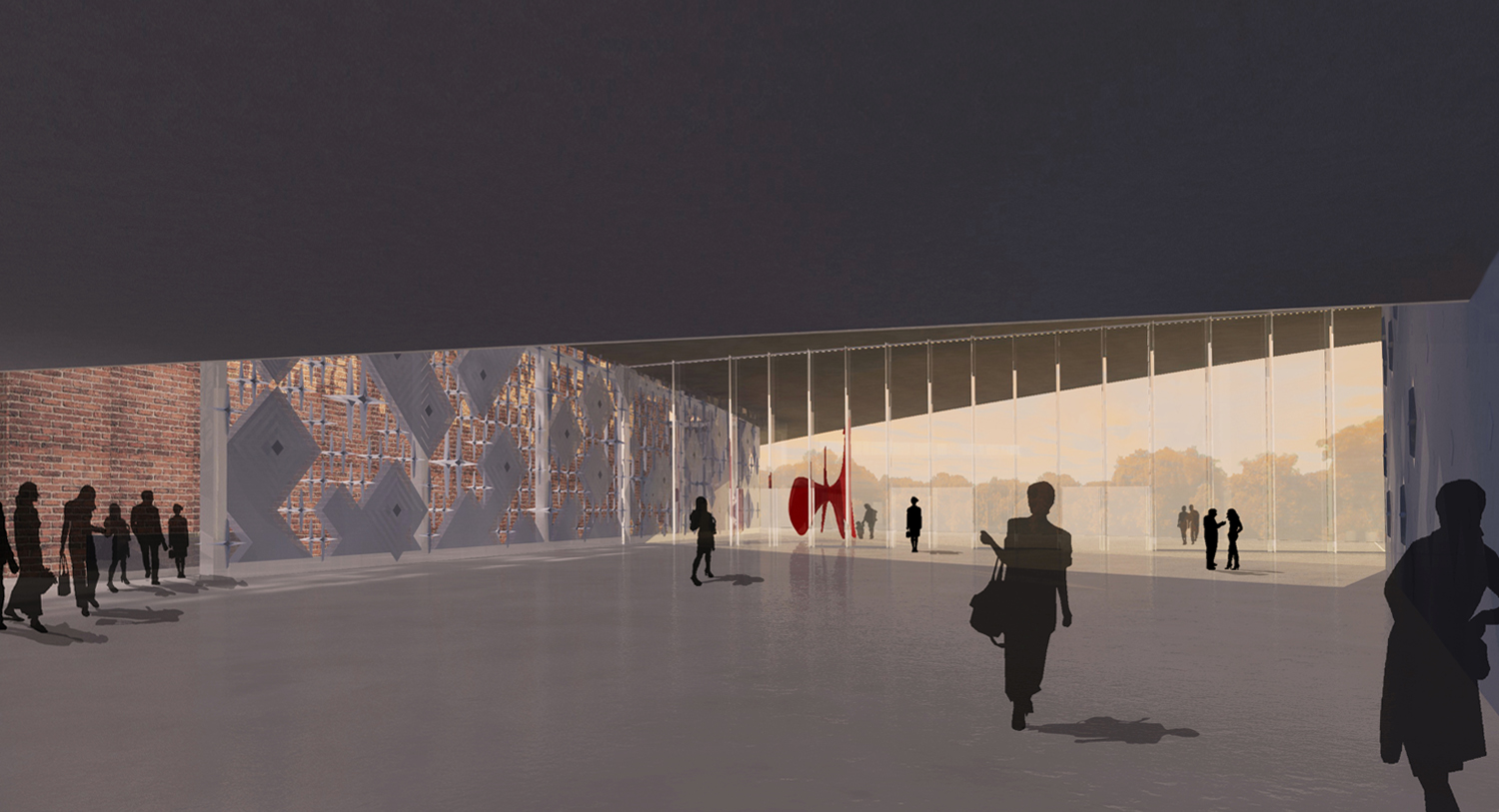 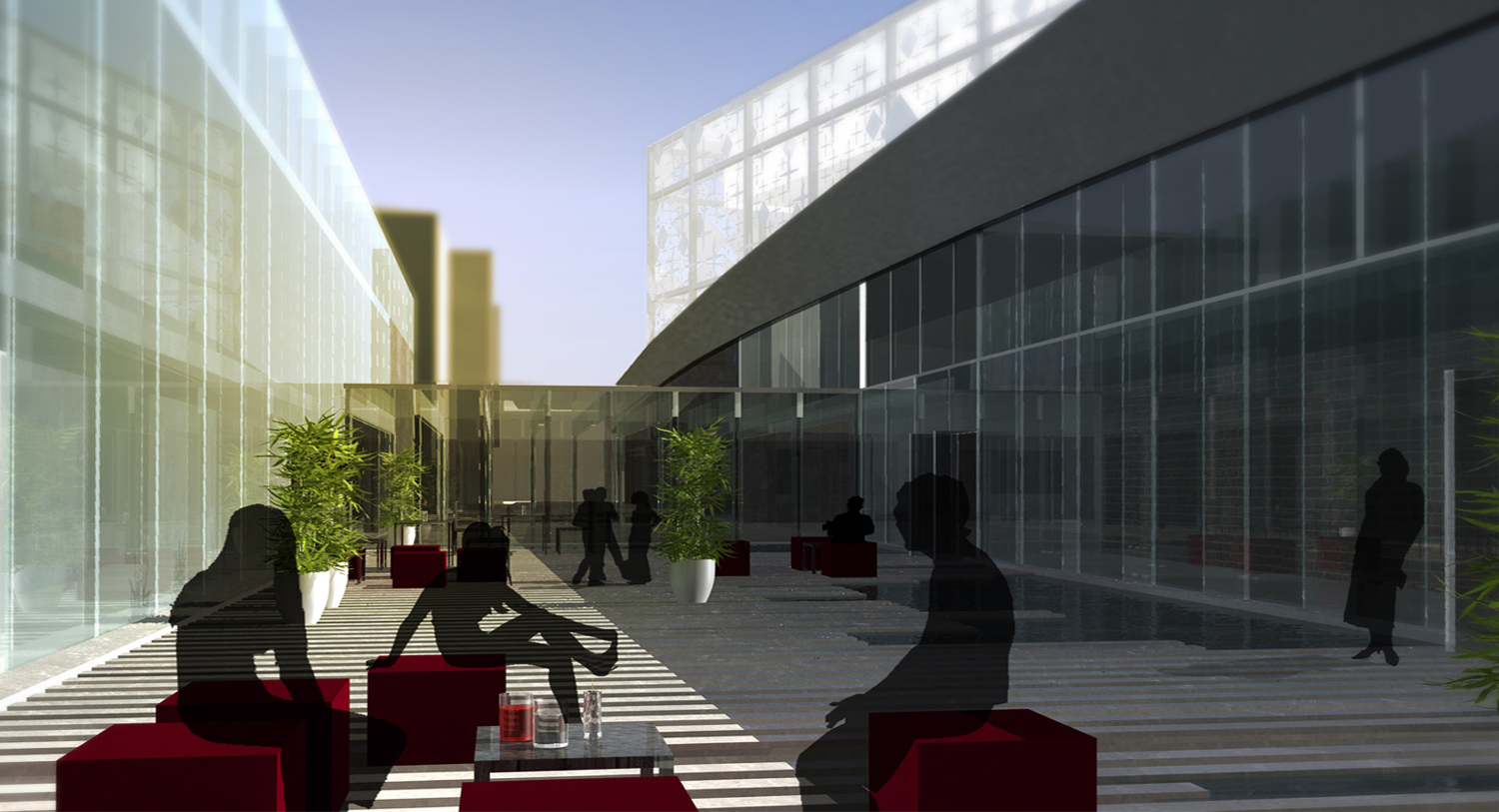 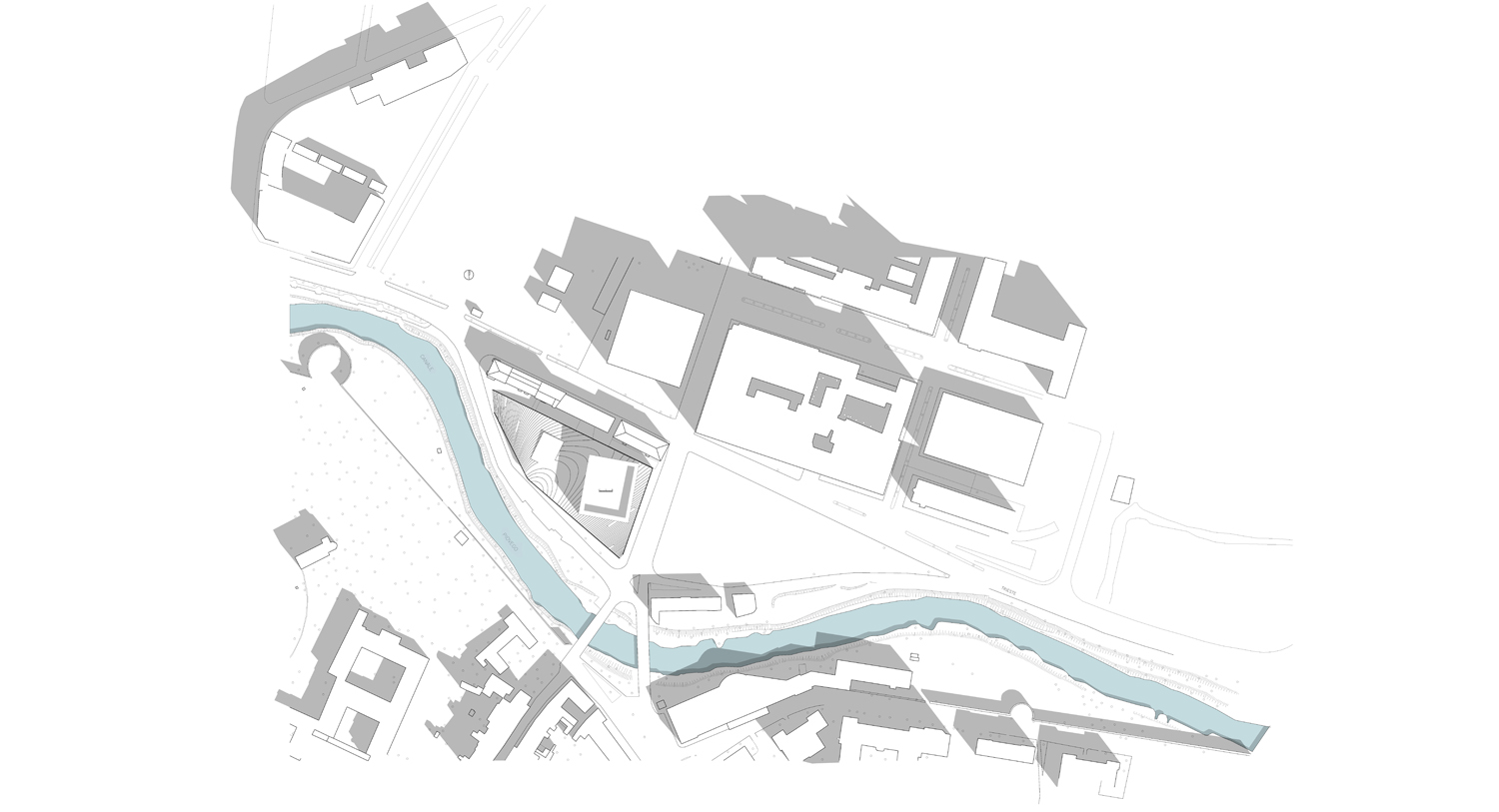 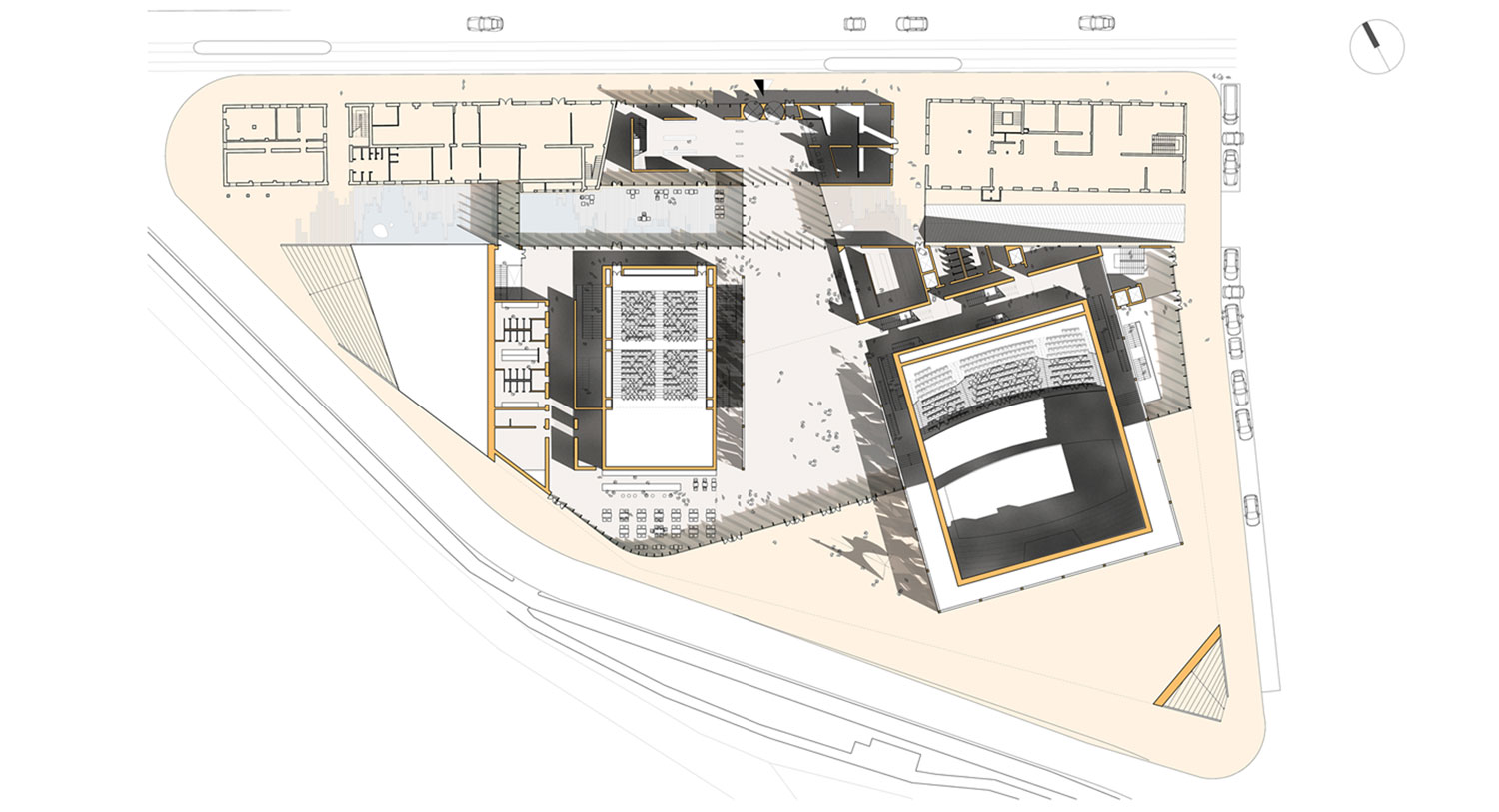 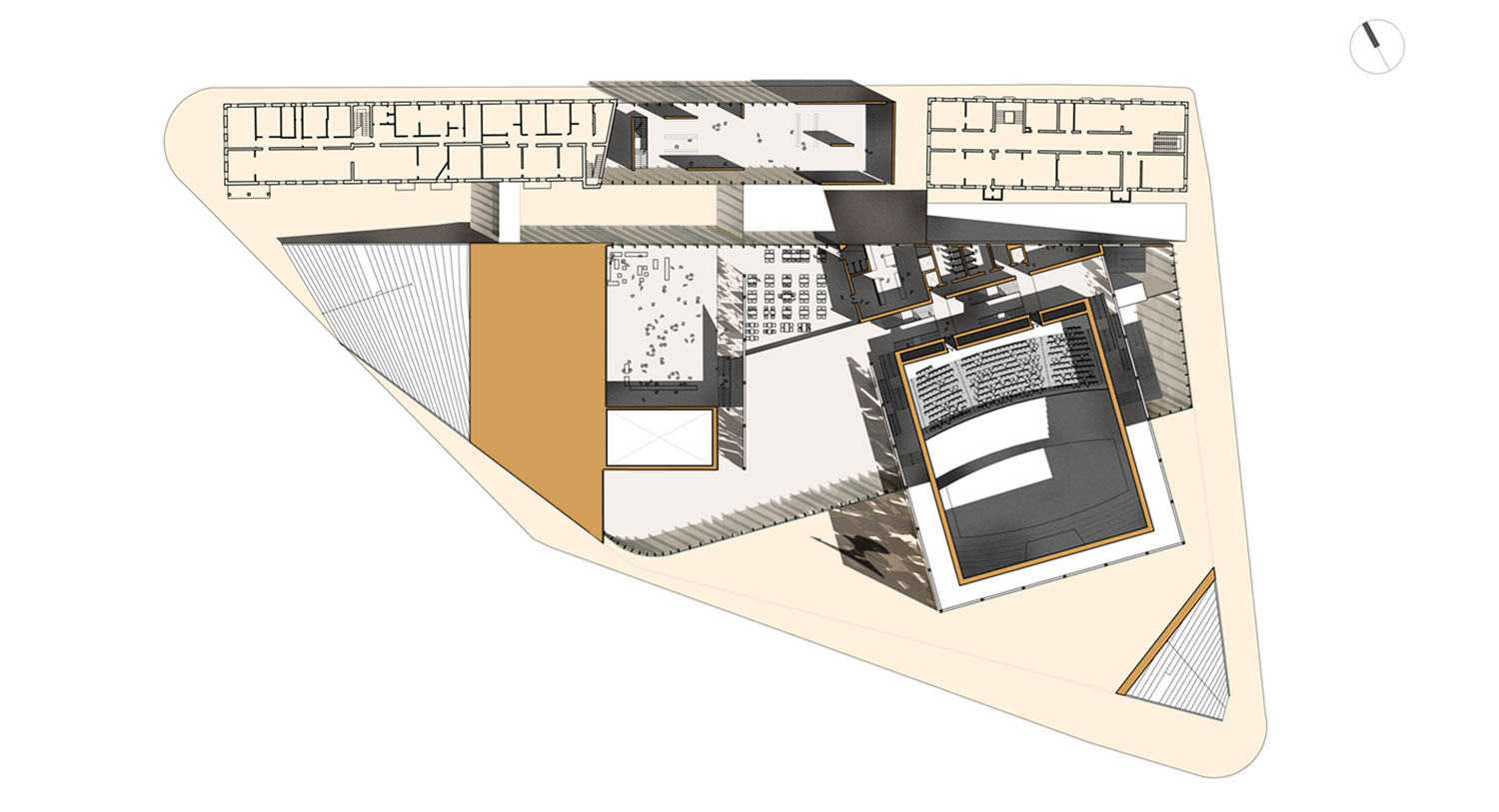 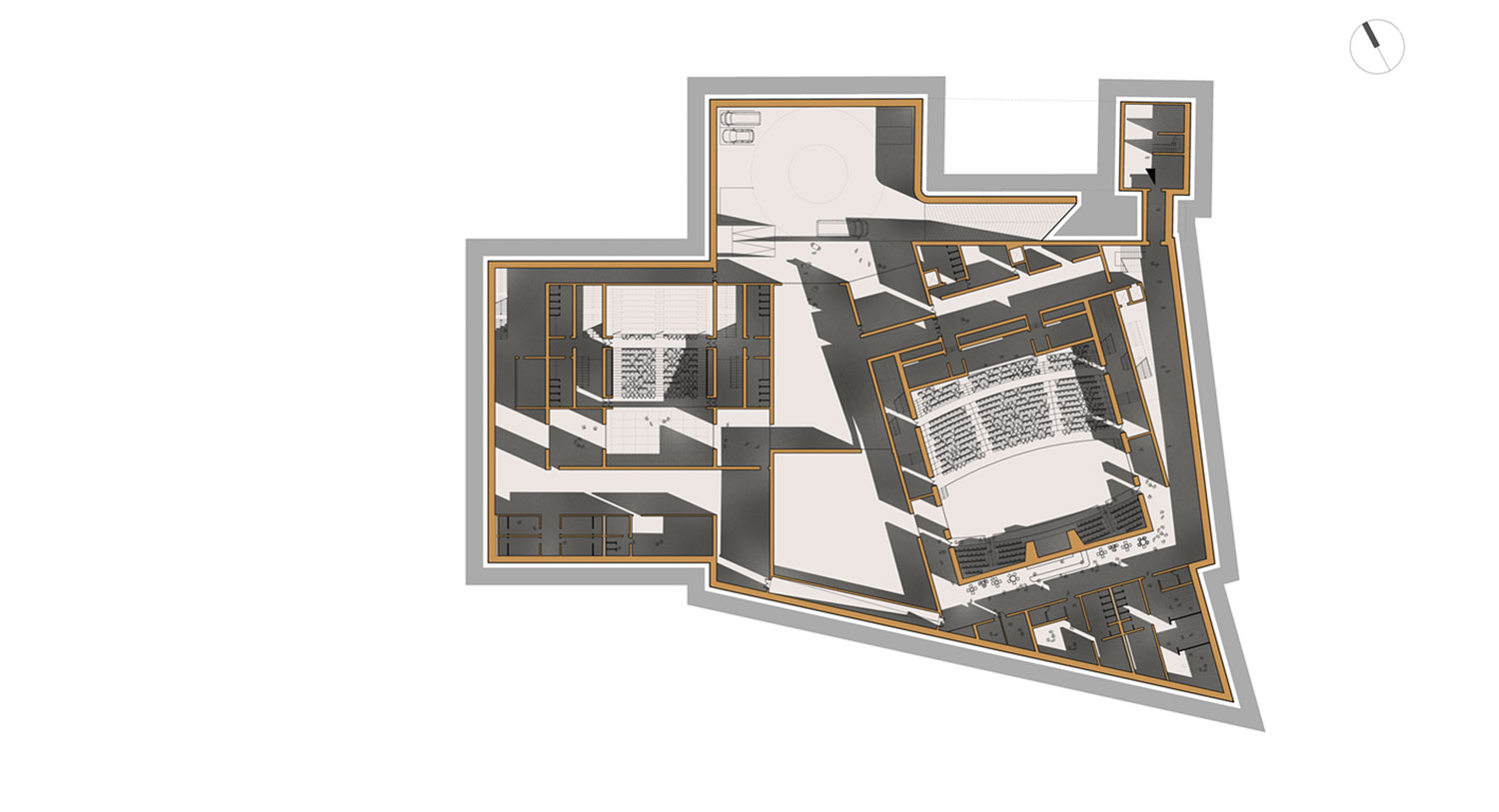 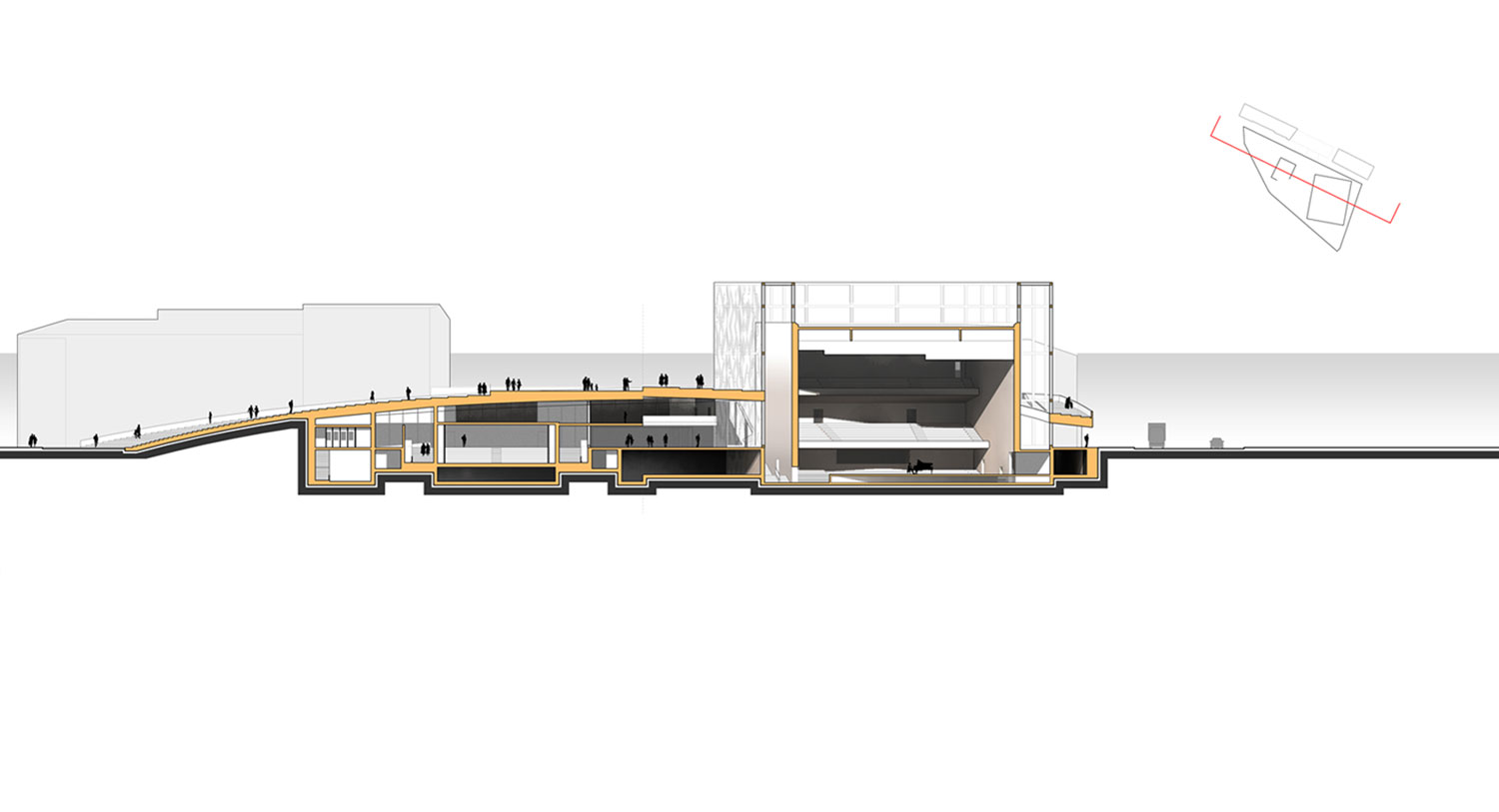 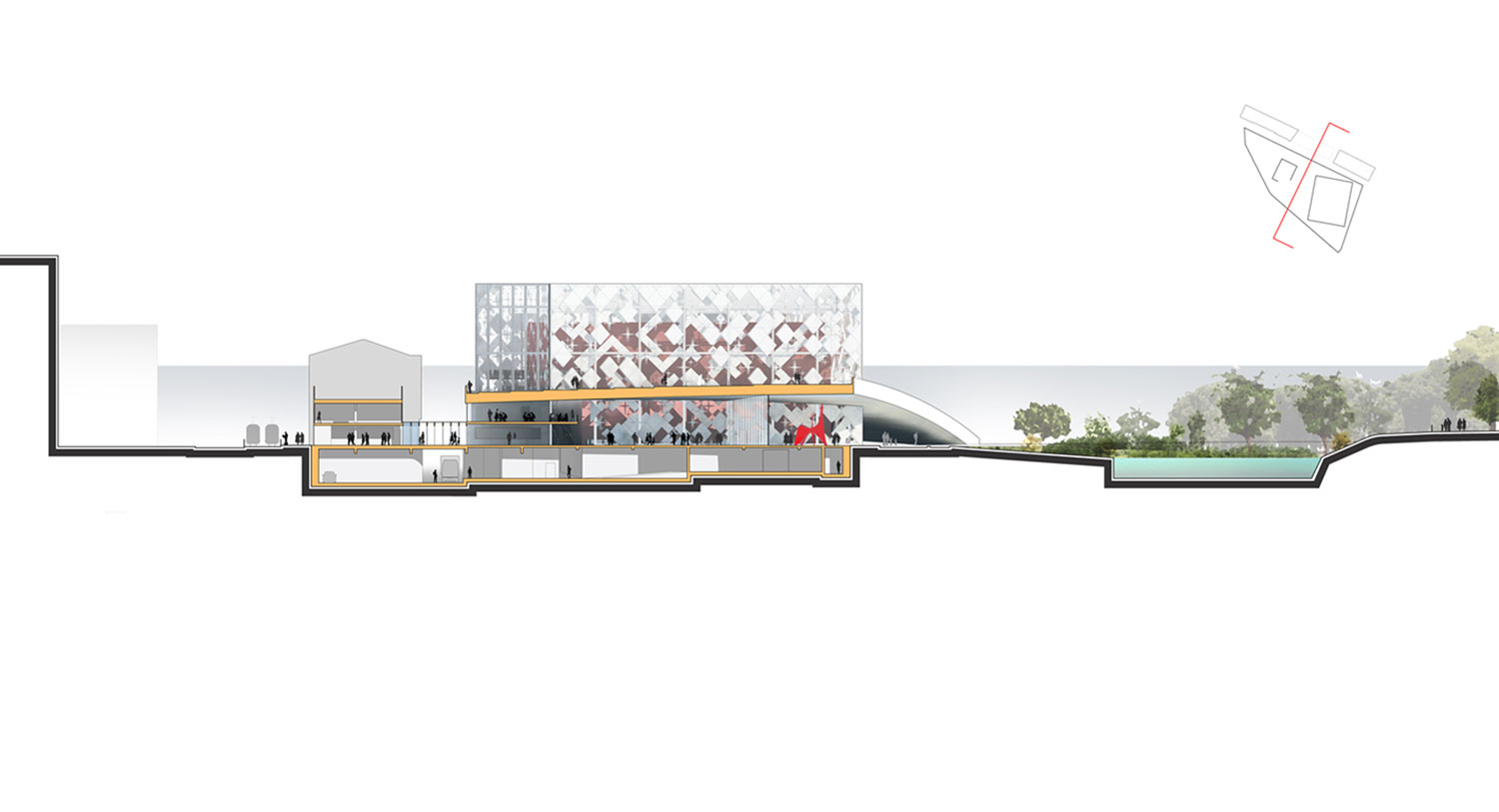 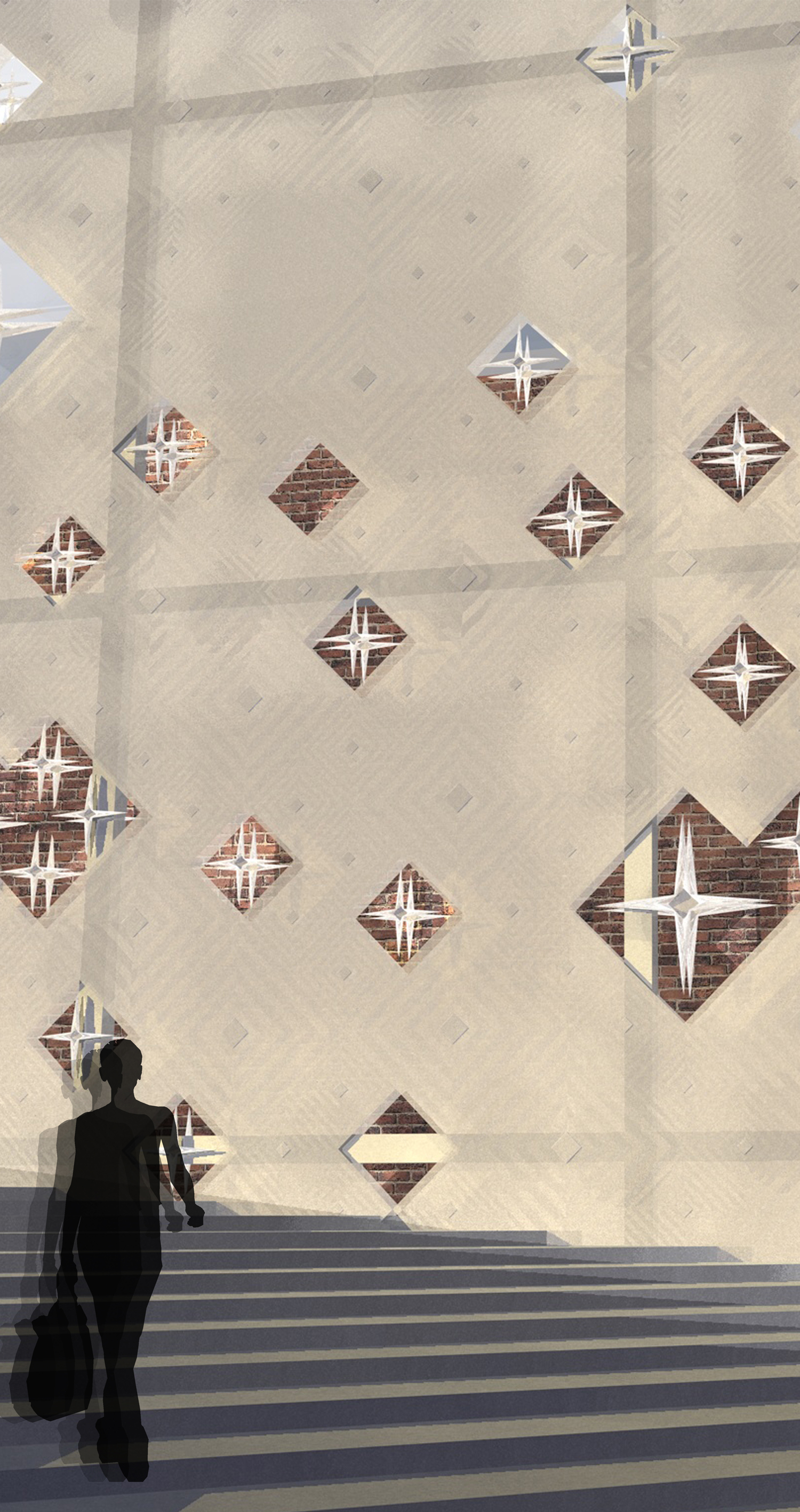 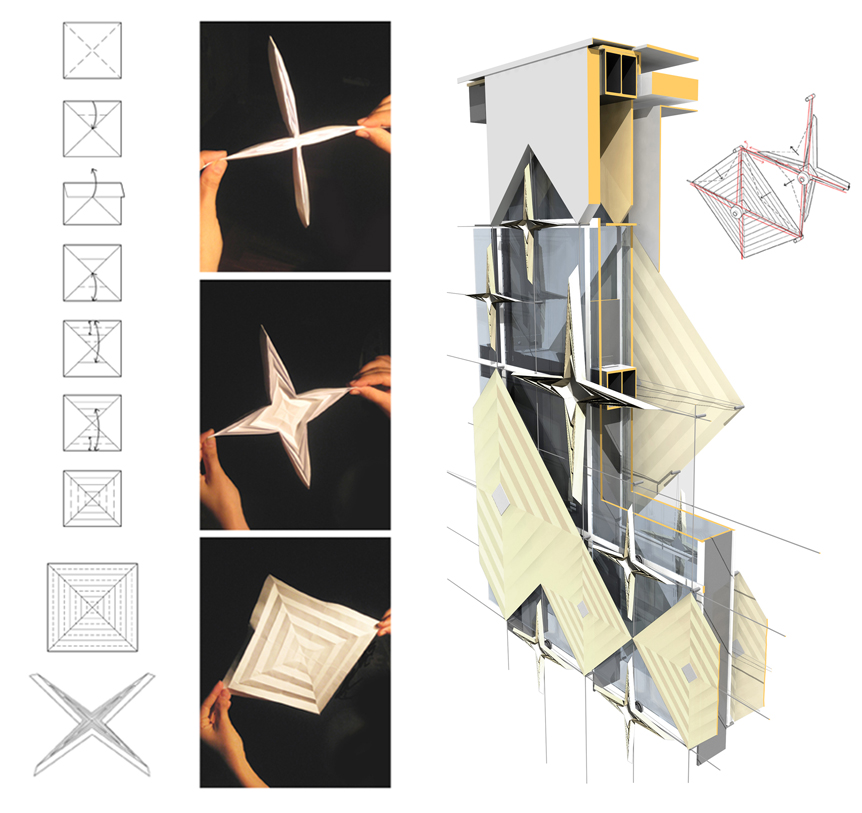