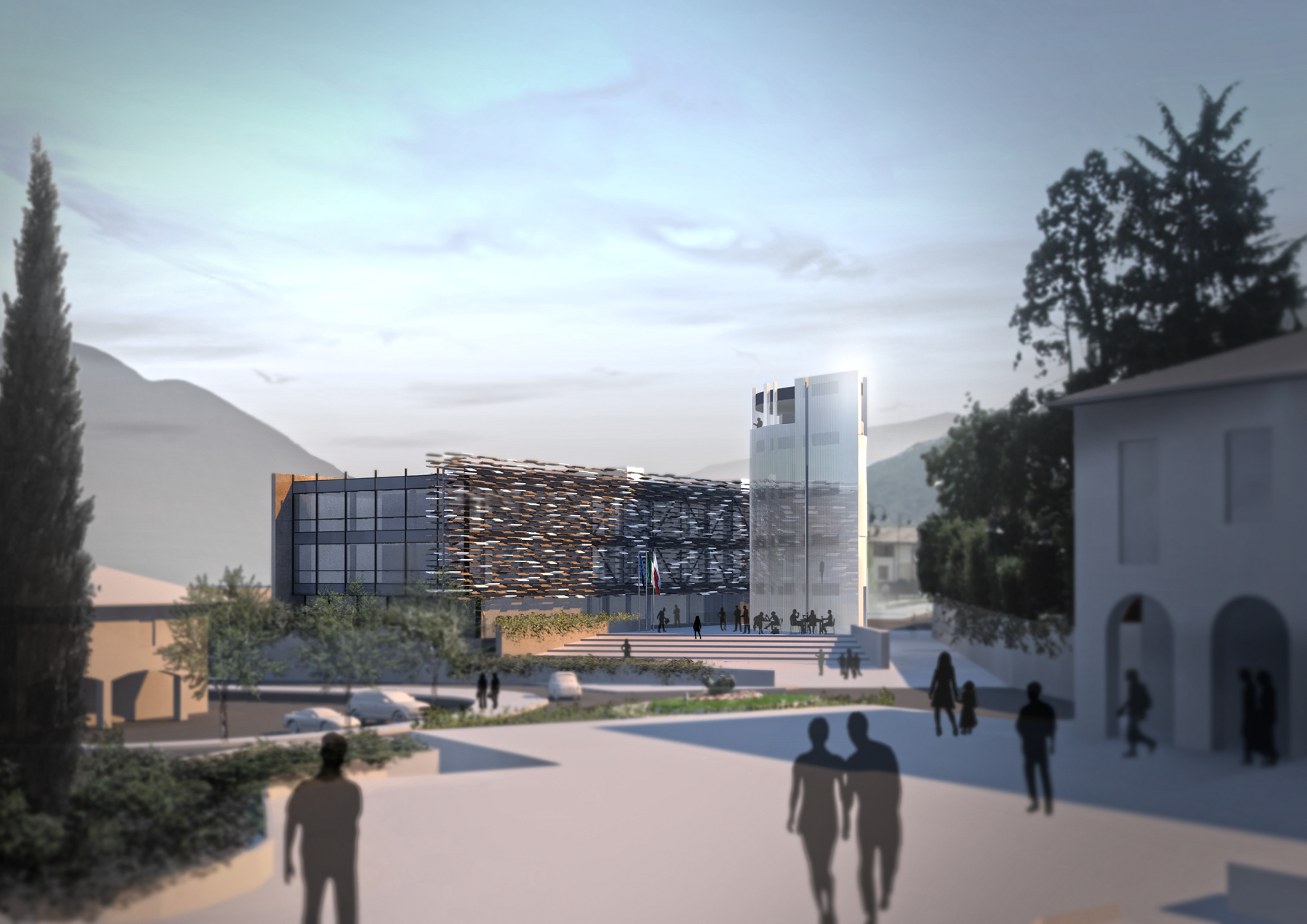 The town of Paratico is located east of Brescia, on a hill with a beautiful view over the Iseo lake. The medieval town had grown following the edge of the hill, on the sides of a narrow road. When a new road was built in the 20th century, crossing the hill to connect the slopes, the town rapidly expanded leading to two crucial consequences: first, the morphology of the hill and internal roads providing poor connections, the town’s cohesion was easily broken; second, the new road lead travellers rapidly across the center, and no longer through it.

In order to recover its own identity and to compete with its neighbours, the town of Paratico launches, in 2010, an Interational competition to design a new Town hall.

The new architecture must strongly represent and re-qualify the town and the center becoming a new attraction pool not only for the town itself but also for the surroundings. As the town hall is an important part of this system, it is essential to strongly link it architecturally to the potential assets and cultural highlights. A shape impact study has shown how a frontal solution tends to raise a barrier between the observer and the space behind it, therefore a more disassembled solution has been chosen to open up the spaces to mutual communication; moreover, the flightlines invite the observer to come closer and indicate there is something interesting even behind it.

The project refers to a broadly established concept of institutional architecture with one horizontal, massive, and another vertical element. The use of simple volumes gives authority and strength of image to the complex.

+ The piazza is the heart of the project. This outdoor space opens up towards the old town recreating a central place for people to meet. It is not only an important entrance to the administrative headquarters, but can also be used to enlarge the existing marketplace, or as a terrace with outdoor facilities for the central café.

+ The main building hosts all private and public offices, archives, a small auditorium for lectures or conferences and a small area of rentable offices. It has a massive brise-soleil facade in local stone, carved from the lake’s mountains, held by a steel structure. It stands in the background and contrasts with the tower building, which has a translucent double glazing layer that reflects the stone facade as the lake reflects the mountains.

+ The tower is a cultural attraction and landmark, completely independent from the town hall building and can be used even during nighttime when the tower is lighted up, glowing and transforming itself into a lighthouse which attracts gazes from the whole lake area. It hosts a café on the ground-floor, keeping the place alive during the whole day and in all seasons. The three upper floors host exhibition spaces for cultural events, which can as well be rented for private exhibitions. The last floor is an open-air terrace with a 360° viewpoint over the medieval center of Paratico, the ruins of the medieval castle and the lake. 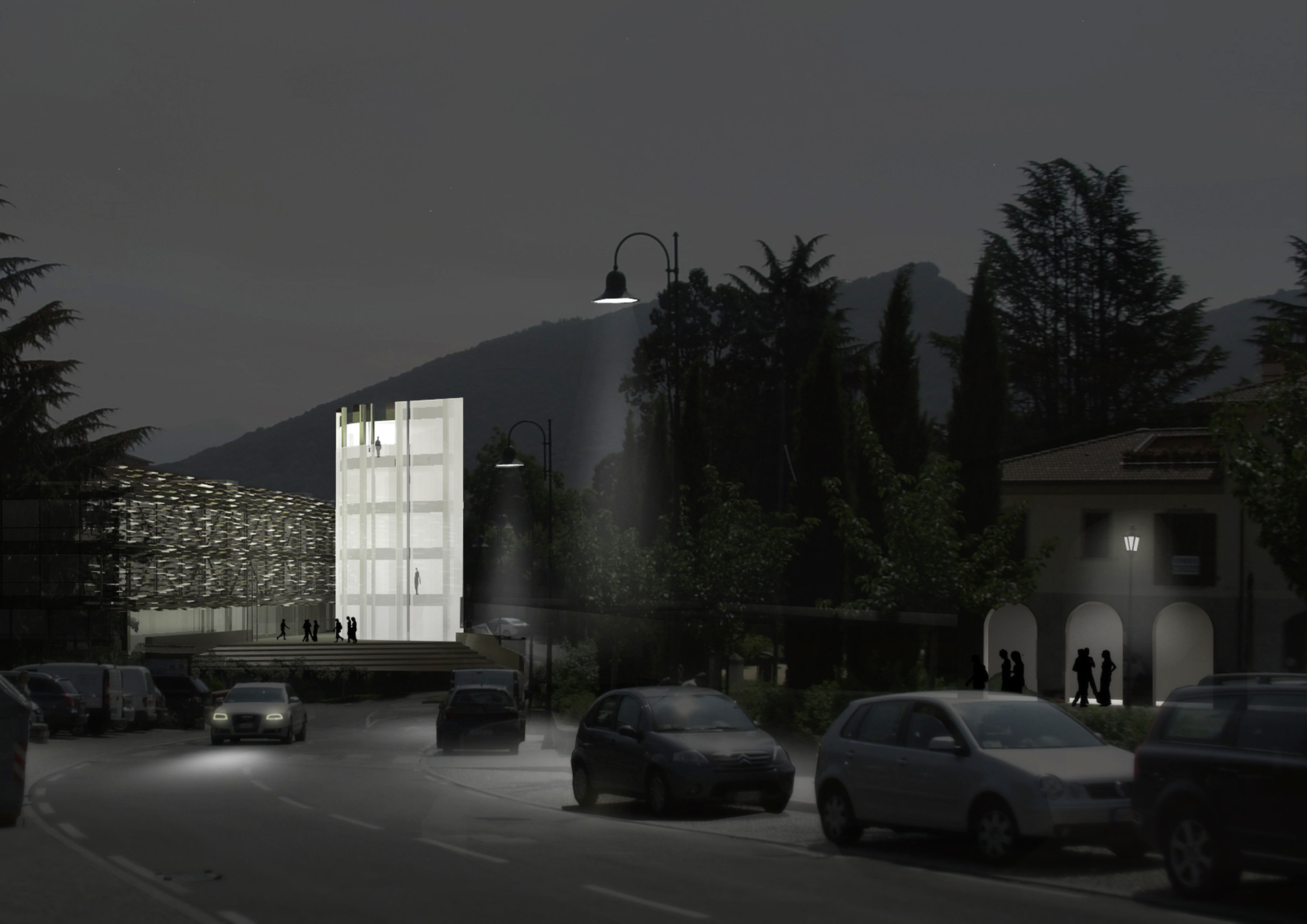 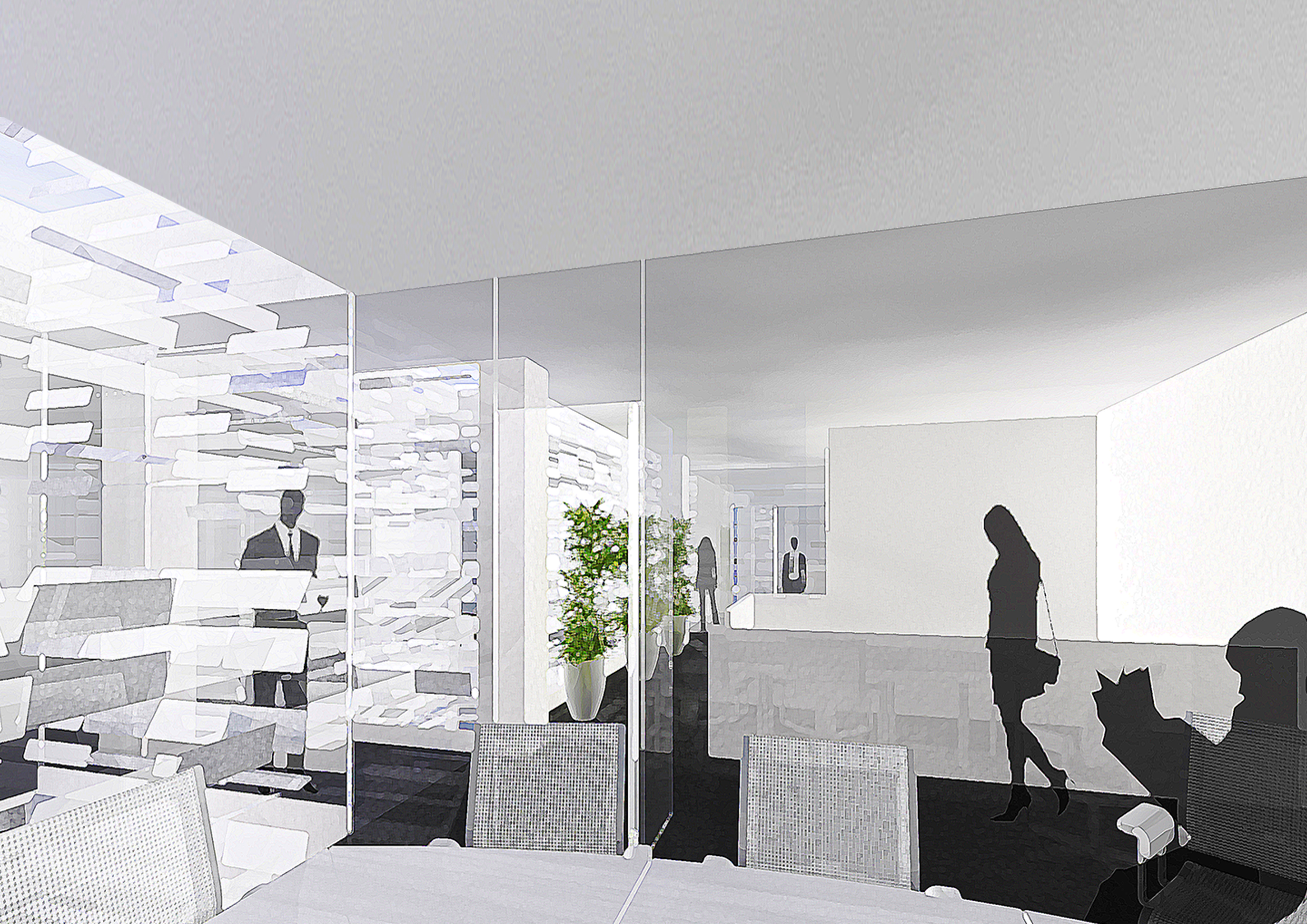 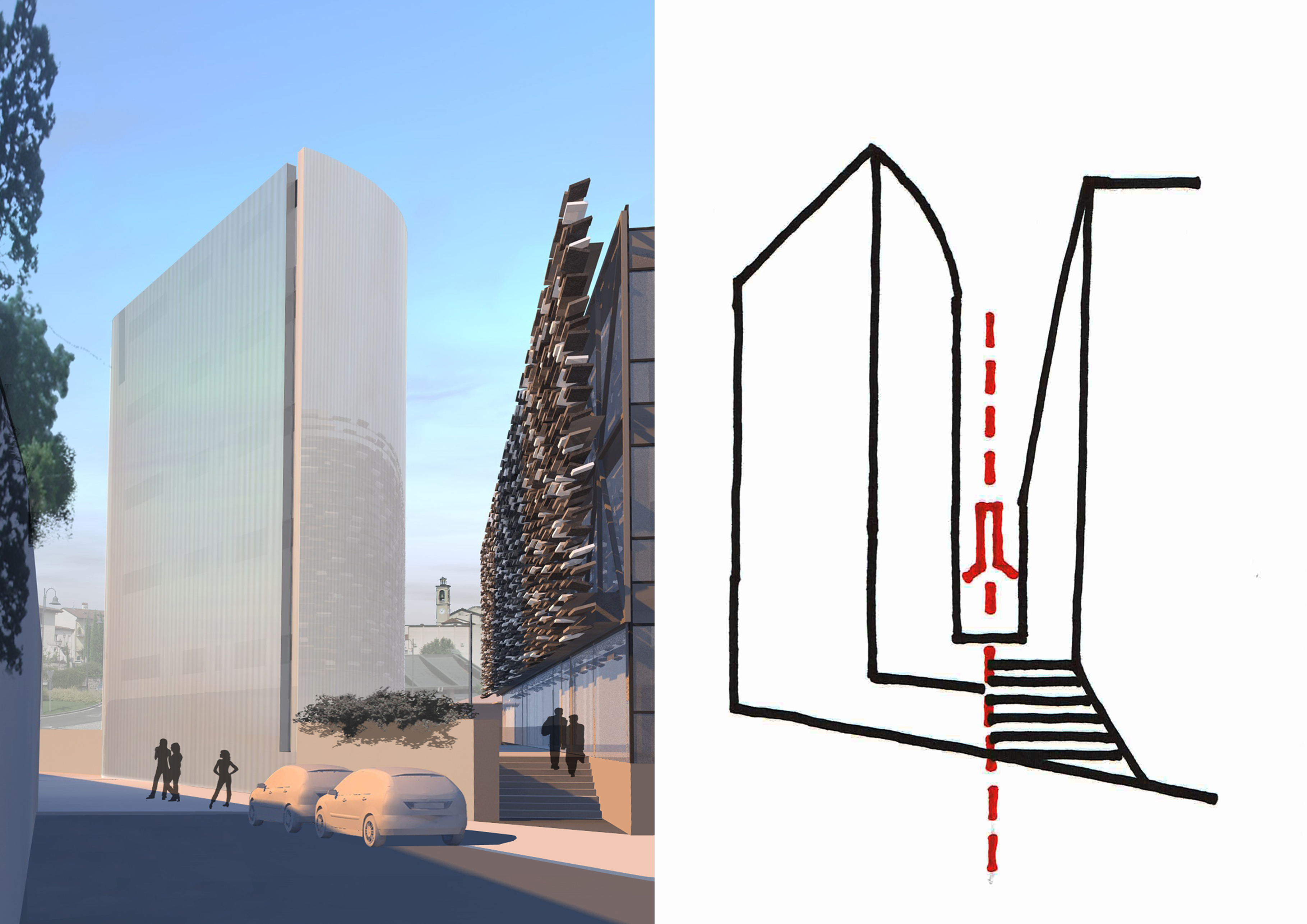 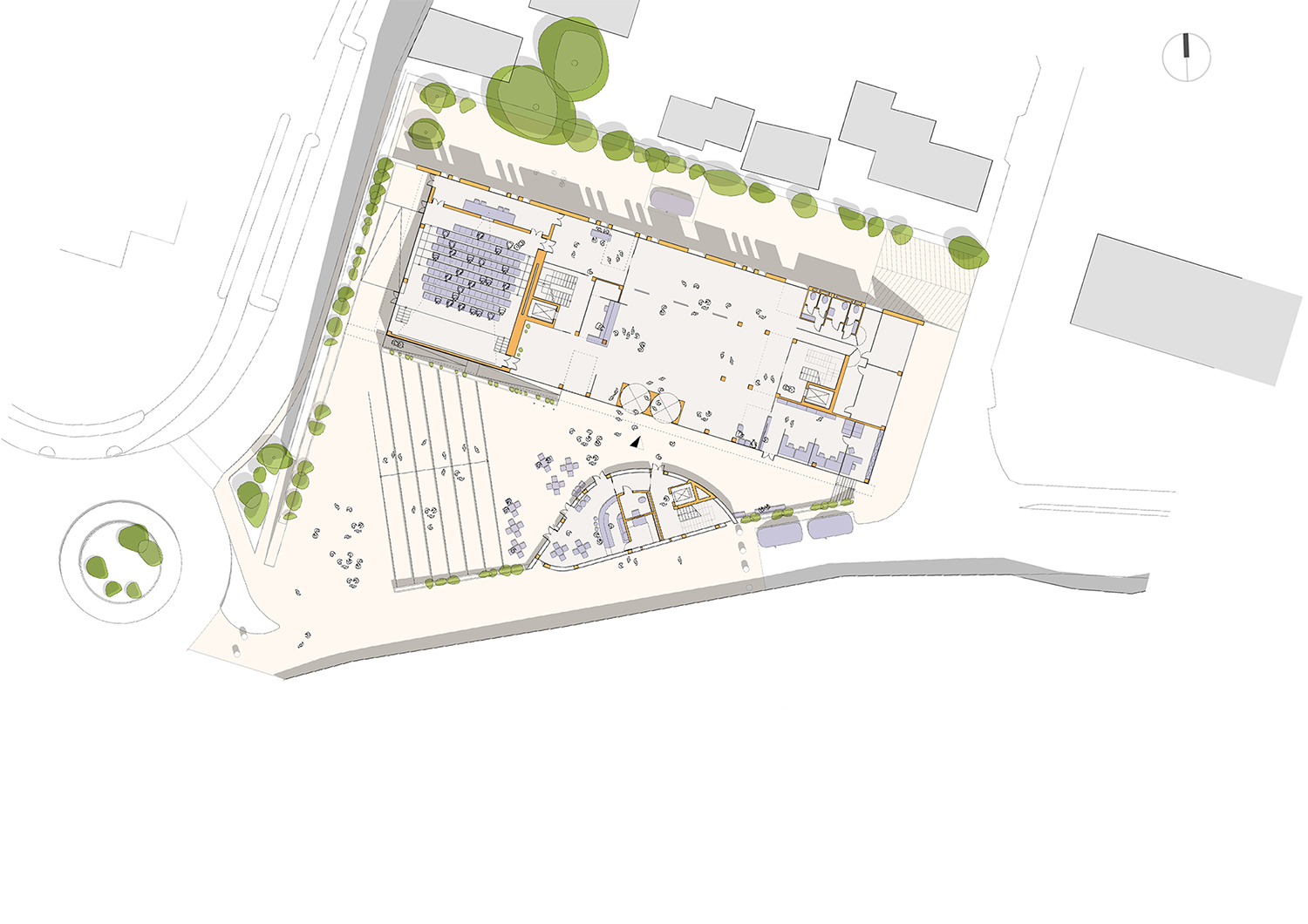 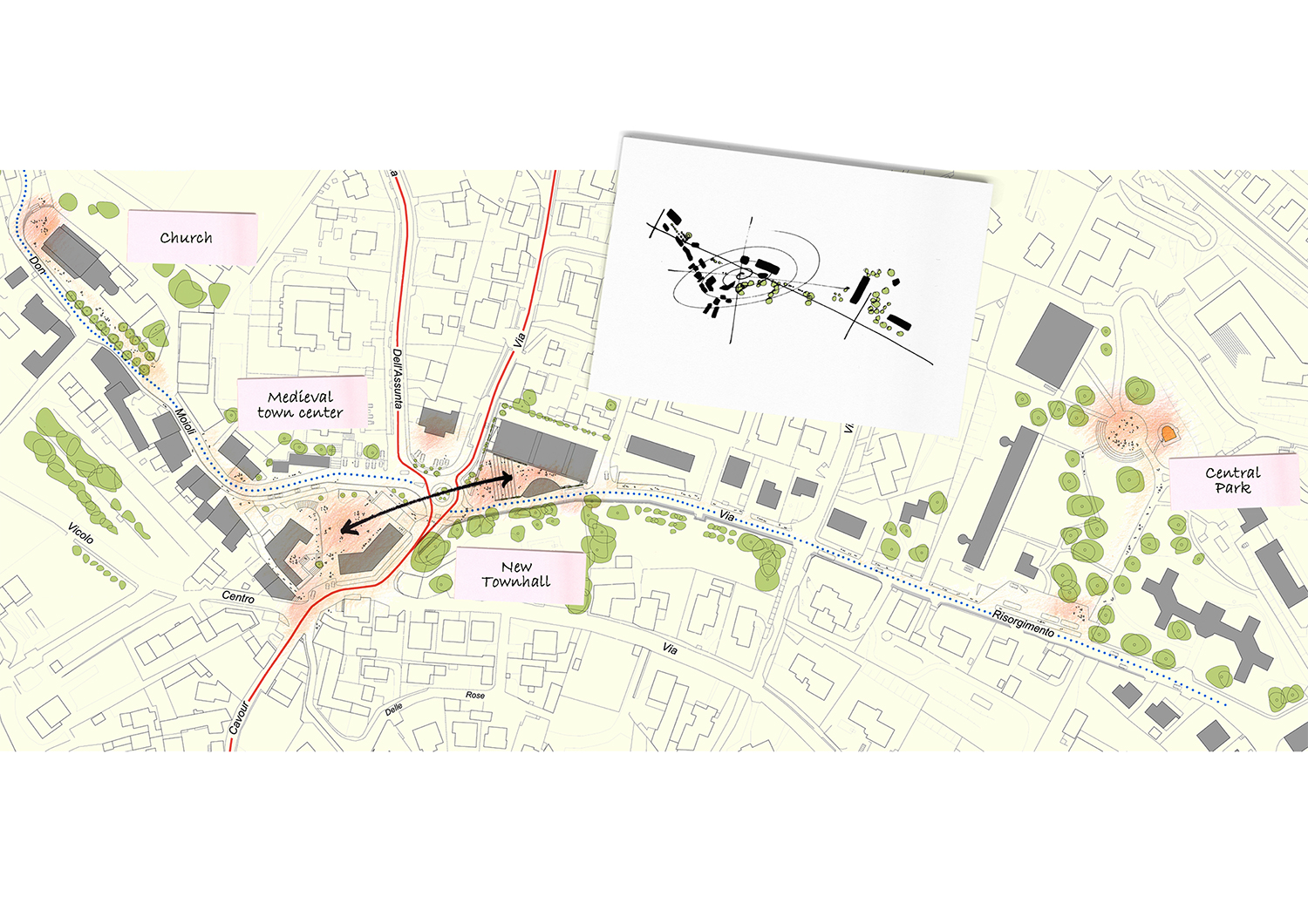 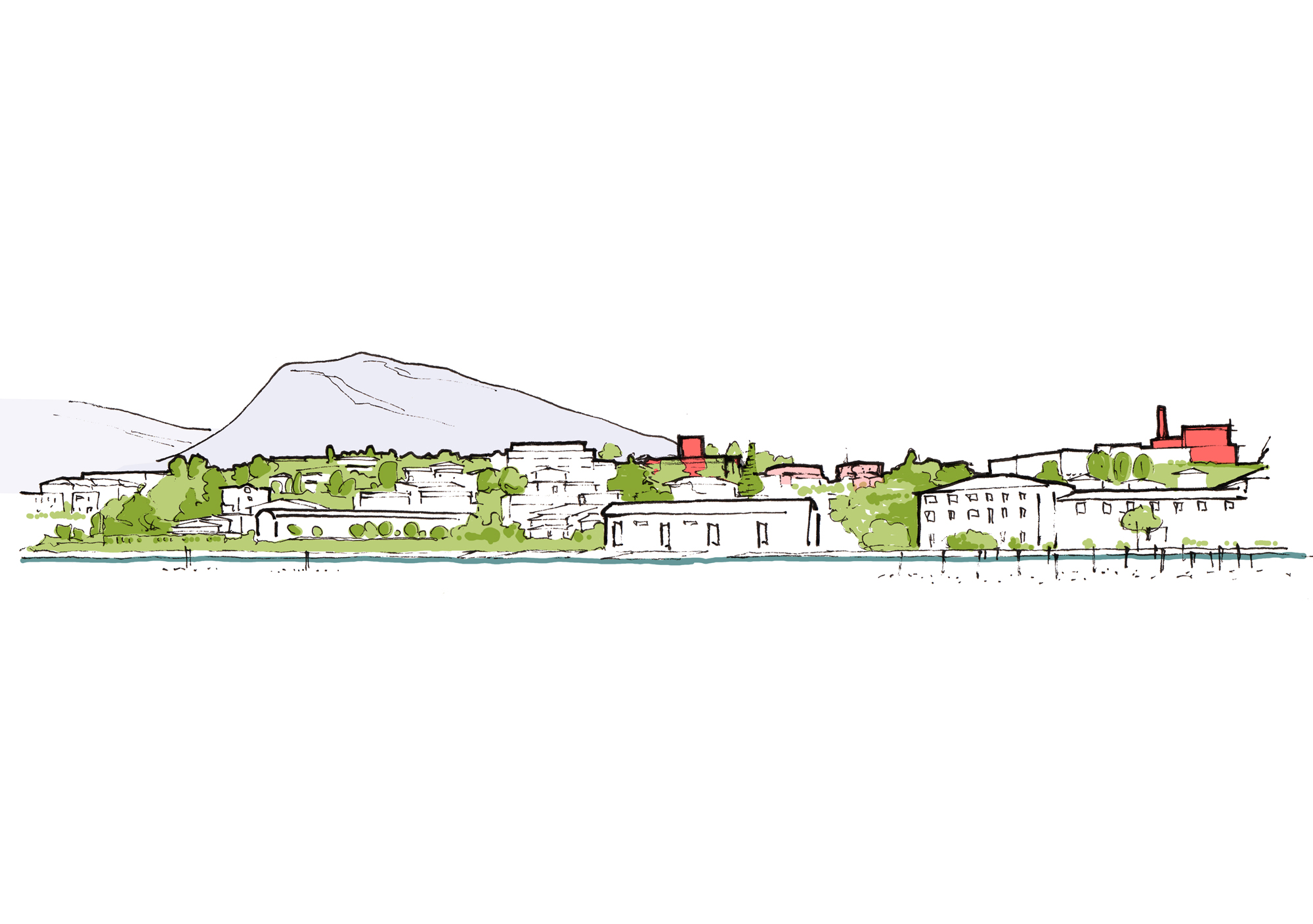 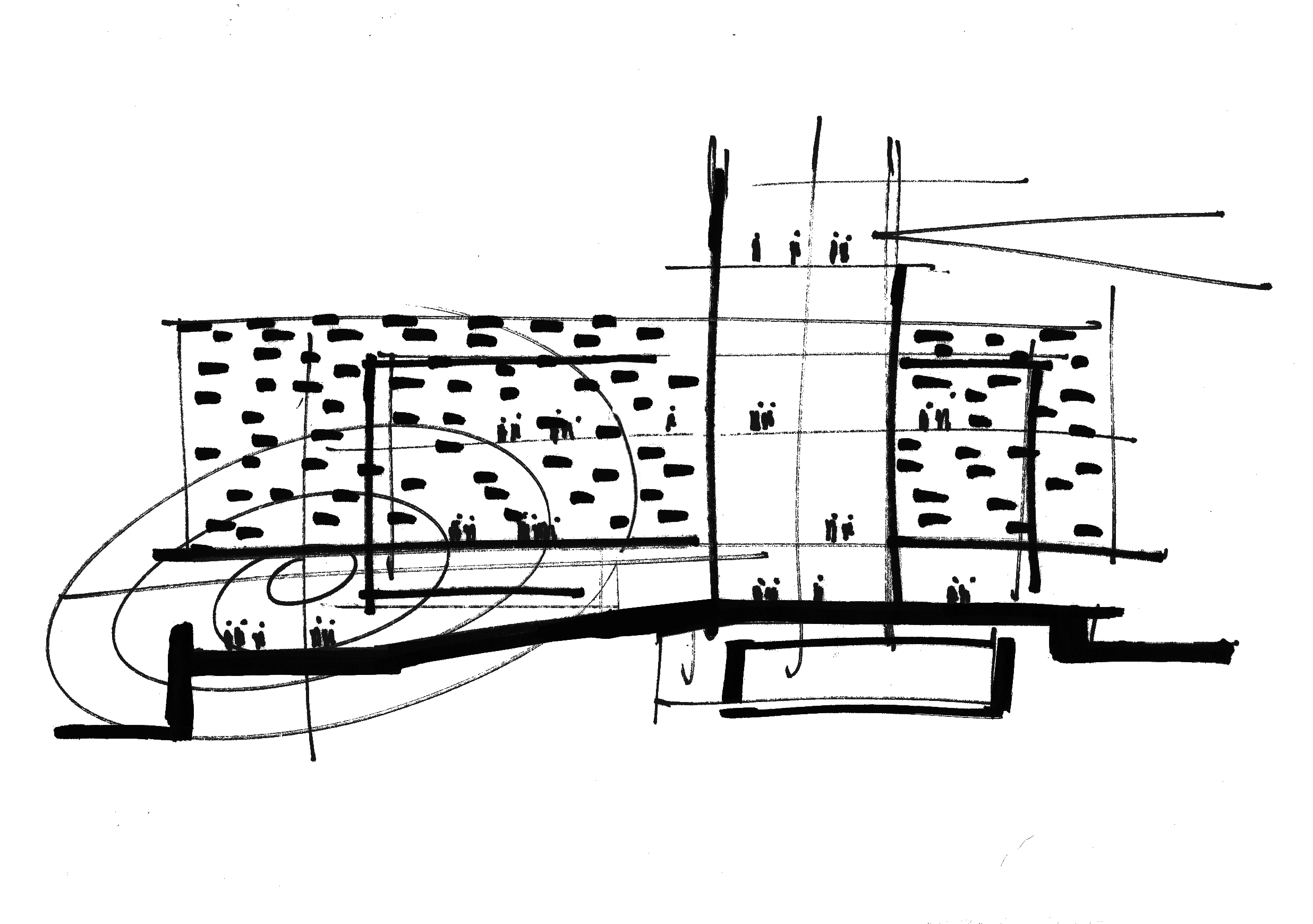 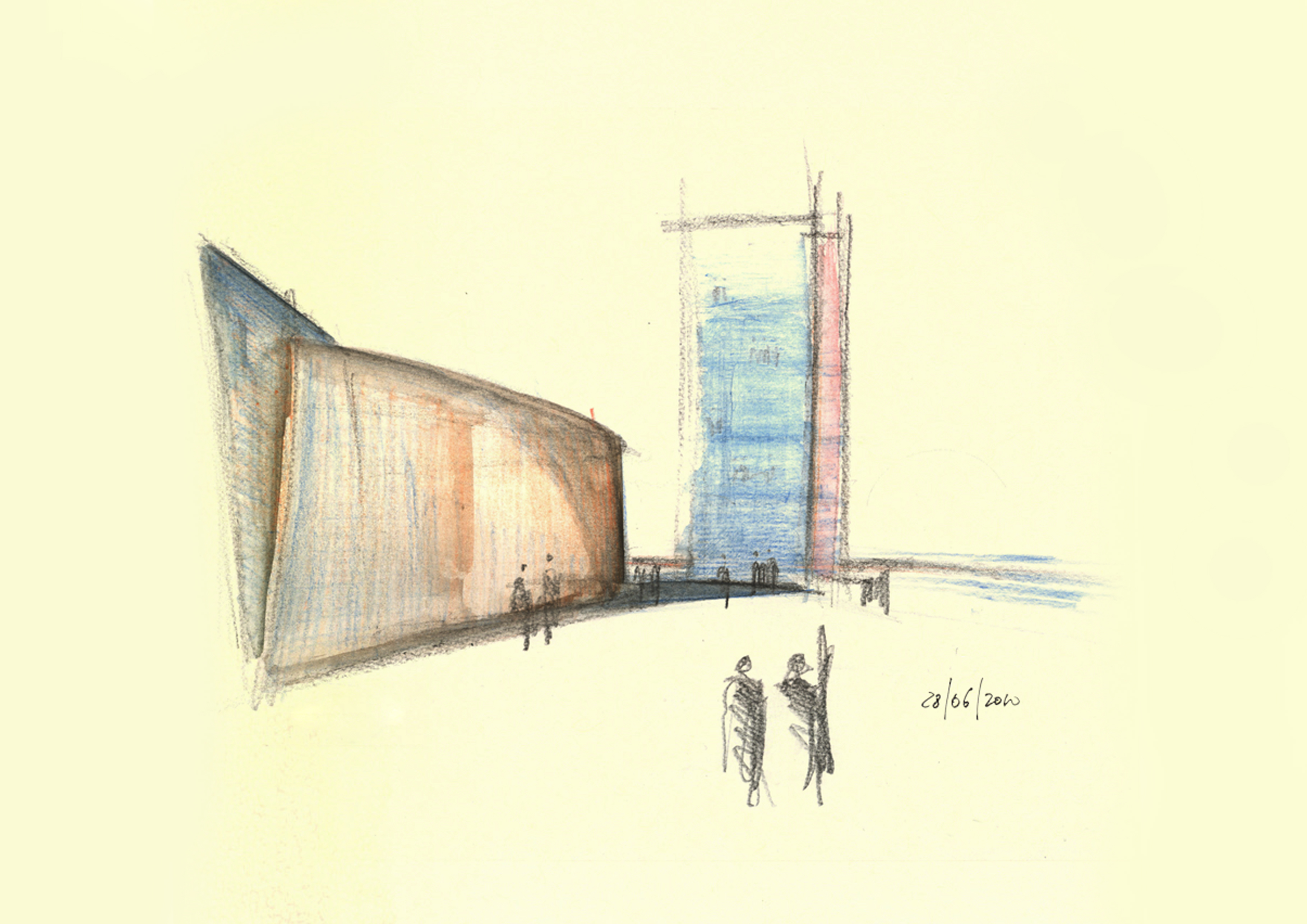 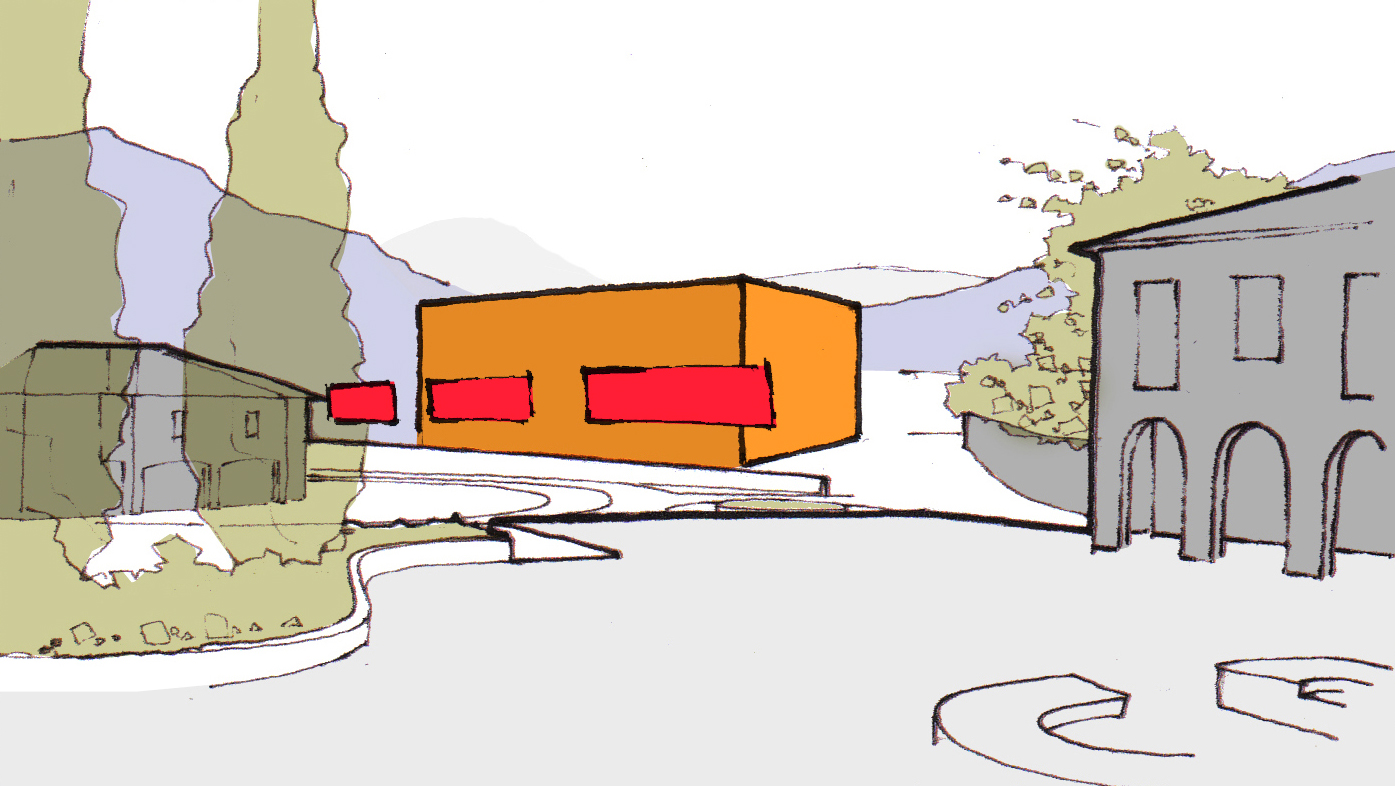 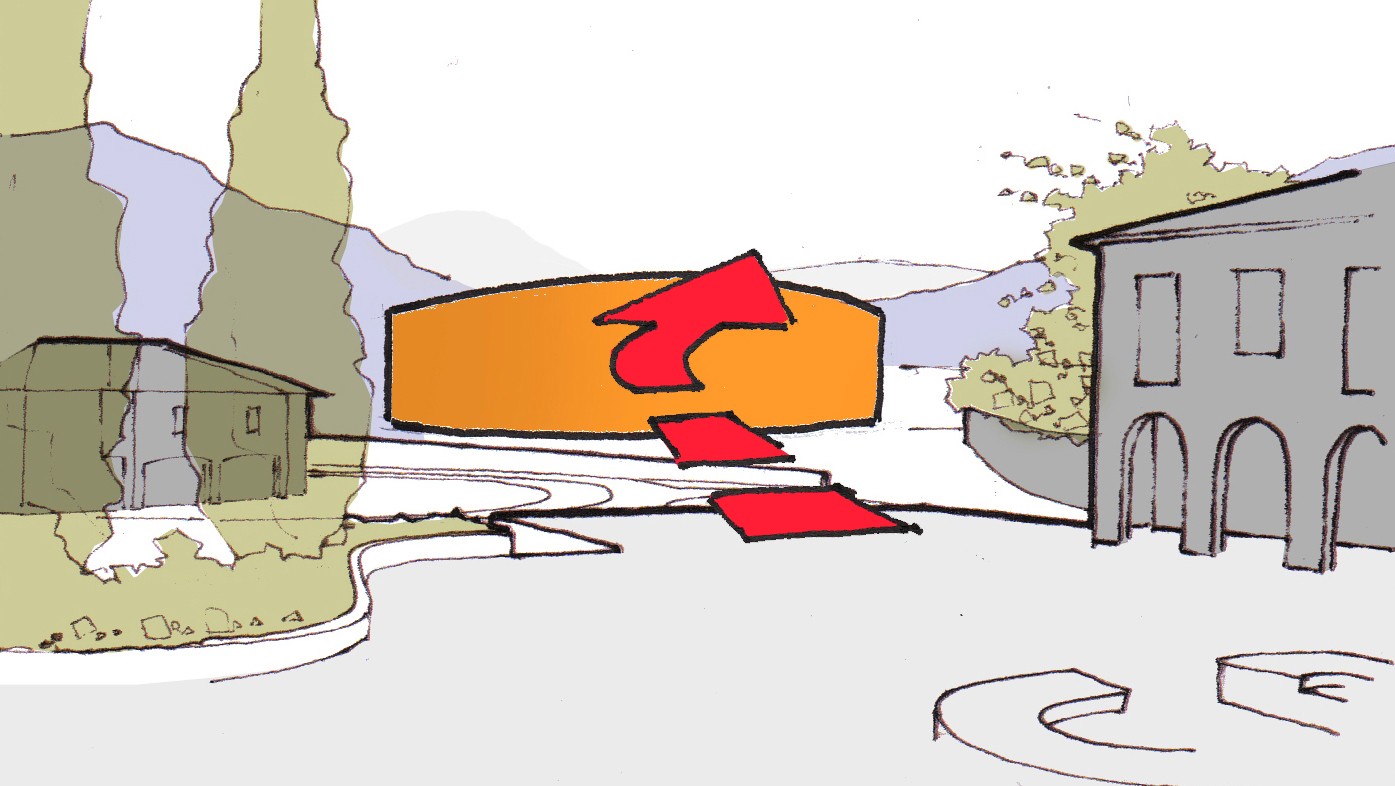 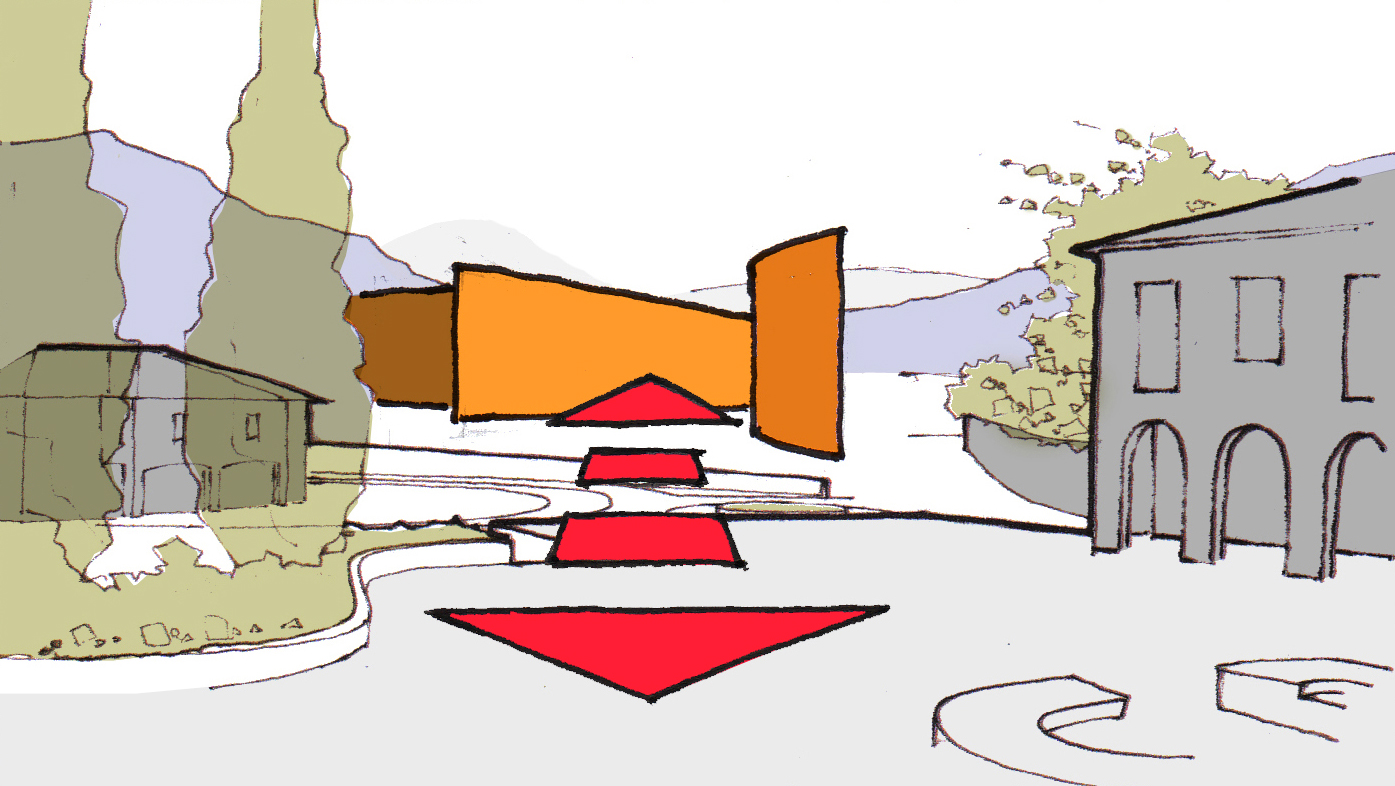